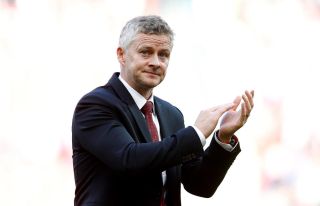 Ole Gunnar Solskjaer was pleased to see Manchester United get back to winning ways, even if their previous performances have been “miles better” than Saturday’s against previously unbeaten Leicester.

With draws at Wolves and Southampton book-ending a chastening home loss to Crystal Palace, the Red Devils enjoyed a timely shot in the arm on their return from the international break.

Missed penalties cost United dearly in two of those matches, but Marcus Rashford made no mistake from at Old Trafford, with his early spot-kick proving the difference in a hard-fought 1-0 win.

Highlighting United’s team spirit and character, Solskjaer said: “It’s the first time we’ve had to defend for longer periods, and I thought we did it excellently.

“Of course, we want to play better than this. We want to have the ball and dominate.

“But some games, sometimes you play against teams that give you problems and I thought we rode the game out well.”

A second clean sheet in 16 league matches was key to the victory against Leicester, whose fans goaded Harry Maguire in his first reunion since his record-breaking summer switch to United.

Good luck to @lcfc for the rest of the season… thanks for the reception 🤷🏻‍♂️😂 pic.twitter.com/r6ajpX2m7T— Harry Maguire (@HarryMaguire93) September 14, 2019

“I’ve got loads of admiration for (Jamie) Vardy. I think he’s my type of centre-forward, runs in behind, harasses – and you’ve got to be spot on with your decision-making, when to stay up, when to drop off.

“I think both of them proved their worth today and there were a couple of races and Harry did well against him.”

Asked about the chants and jeers aimed at Maguire by the Leicester fans, Solskjaer said: “I don’t think that bothers him whatsoever.

“You’ve got to be that way – and that’s when you play, when you coach, when you manage.

“We don’t get carried away when we win a game that we maybe don’t deserve to win.

“But we don’t get in the dumps when we don’t win games that we should win because the performances have been miles better than this.

“Today we just have to accept three points and wake up tomorrow with a smile, have the day off and relax a bit and look forward to next week.”

Solskjaer picked out Scott McTominay for praise after an impressive midfield display, while Rashford showed impressive confidence to net from the spot after his miss in the loss to Palace.

“Every striker misses a penalty,” the United boss added.

“I’ve seen (Diego) Maradona, (Lionel) Messi and (Michel) Platini against Brazil, and Zico – my favourite player of all-time – missed in the same game.

“You’ve just got be confident enough to step up next time. What’s the worst that can happen?”

It's a first defeat of the season for the Foxes.#MunLei— Leicester City (@LCFC) September 14, 2019

Leicester boss Brendan Rodgers believes it was a “soft penalty” but could not really argue with it being awarded against Caglar Soyuncu on a frustrating afternoon for his in-form team.

Rodgers said: “I think the game as a whole, there wasn’t so many chances in it, so that was a disappointment for us.

“I think overall we’re a bit frustrated. We didn’t start the game well, right from the first kick-off.

“Our idea was to get on the front foot and we ended up putting ourselves on the back foot and then we obviously conceded a penalty early on, which isn’t ideal. But we grew into the game…last 15  minutes of the first half.

“We spoke at half-time that we have to have that belief and courage to play and then we were much quicker and much better through the thirds then.

“We just needed that final little pass or something to drop for us in the box and I felt we could have then got a deserved point but it wasn’t to be – but lots of lessons for us.”