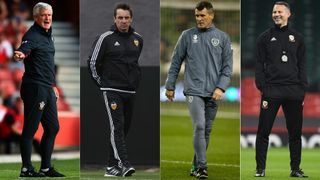 He made his name as a super-sub at Old Trafford and Ole Gunnar Solskjaer is now going to try to live up to that tag as a manager at Manchester United.

The baby-faced Norwegian and United favourite will fill the void left by Jose Mourinho on a caretaker basis until the end of the season, while Ed Woodward and the club's hierarchy search for a permanent successor.

Molde boss Solskjaer – who endured a forgettable stint in charge of Cardiff City as they failed to avoid relegation in 2013-14 – is another of Alex Ferguson's pupils to have gone on to become a teacher.

The list of Ferguson's former players to have stepped into the dugout is long but we take a look at some of the biggest names to have tried their luck in the managerial world.

We can confirm that Ole Gunnar Solskjaer has been appointed as caretaker manager until the end of the 2018/19 season.He will be joined by Mike Phelan as first-team coach, together with Michael Carrick and Kieran McKenna. December 19, 2018

A star forward under Ferguson during his playing days, Hughes has put together a decent managerial CV. While he has fallen on tough times, the former Wales boss established Blackburn Rovers as a top-six Premier League side during the 2000s. After avoiding relegation and steering the Rovers into the UEFA Cup in 2006, Hughes was headhunted by Manchester City in 2008. What started off so promisingly turned sour as Hughes – who oversaw a 10th-place finish in his first season – was sacked in December 2009. Hughes bounced back at Fulham by finishing eighth but he decided to cut short his tenure in 2011 before a brief stint at QPR. The 55-year-old was a model of consistency at Stoke City, where he guided the club to three consecutive ninth-place finishes from 2013 to 2016 but progress stagnated and he was eventually axed. Hughes is now without a job after just over eight months at Southampton.

The experiment that was Neville's foray into management at Valencia did not go according to plan. Former United captain Neville surprisingly left a lucrative and high-profile position with broadcaster Sky Sports to take over Los Che in December 2015 – his first managerial job. A close friend and confidante of Valencia owner Peter Lim, the United great's tenure came to an undignified end following dire results amid fan vitriol. Neville was sacked in March after just 10 wins from 28 matches in all competitions. The 43-year-old has since returned to punditry via Sky, while he remains heavily involved with Salford City alongside Lim, brother Phil Neville, Nicky Butt, Paul Scholes and Ryan Giggs.

Keane is living proof that a storied and illustrious playing career does not guarantee success in the dugout. The tenacious and hot-headed Irishman, who captained United and won 17 major titles at Old Trafford, was appointed Sunderland manager shortly after his retirement in 2006. His impact was immediate, taking the club from 23rd in the Championship in August to the title and Premier League promotion. Keane's success at the Stadium of Light did not last as he resigned in December 2008. Ipswich Town was next for the ex-Ireland international, who started the 2009-10 season with no wins from the club's opening 14 matches. Inconsistency eventually brought an end to his role in January 2011. Assistant positions with Ireland and Aston Villa followed but neither were particularly impressive amid concerns over the 47-year-old's no-nonsense approach.

When David Moyes was sacked in 2014, many viewed Giggs as the ideal long-term replacement at United. Compared to Pep Guardiola's rise to the top at Barcelona, Giggs – the most decorated British player in history – was named interim player-manager for the final four matches of the season. A record of two wins, a draw and defeat were Giggs' figures before the United board turned to Louis van Gaal. Retained as an assistant manager to the Dutchman, many tipped Giggs as his successor in Manchester. Again, Woodward overlooked the 13-time Premier League winner in favour of Jose Mourinho in 2016. That snub led him to finally step outside the doors of Old Trafford, with Giggs now Wales manager. Since replacing Chris Coleman in January, the 45-year-old has only claimed three wins as the Dragons struggle for form amid a run of four defeats in five.