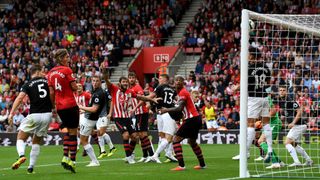 Southampton produced a toothless display as they stuttered to a 0-0 draw at home to Burnley in their opening game of the 2018-19 Premier League season on Sunday.

Mark Hughes' men struggled last term before narrowly avoiding relegation and there was little in their performance to suggest they will be much better this term, as Burnley – who were in Europa League action in Istanbul on Thursday – secured a point.

Burnley were easily the better of the two teams in the first period, with Saints goalkeeper Alex McCarthy making several stops to keep the hosts level.

Southampton did look more threatening in the second half and troubled Joe Hart a few times late on, though their efforts were not enough to break the deadlock.

In a first half that generally lacked quality, Burnley looked the more likely to score, starting well and going close through a Chris Wood header, before Jack Cork saw a goal disallowed for straying offside.

McCarthy then had to be alert to deny Aaron Lennon from close range, rushing out to crucially block the winger's effort 11 minutes in.

Saints gradually improved as the half progressed, though they were lucky to go into the break level – McCarthy producing a smart save from James Tarkowski after Ben Mee's overhead kick fell kindly to him at the back post.

Burnley initially took control again in the second half, but they had a lucky escape just after the hour – Ashley Westwood clearing off the line when Mee looked destined to score an own goal.

Hart then did well to keep Dale Stephens at bay 18 minutes from time, before Mario Lemina went close with another header, but otherwise Burnley looked good value to at least leave with a point.

What it means: Southampton in for another difficult season

Saints' transfer dealings were hardly the stuff of fantasy and, on the evidence of Sunday's game, the likes of Danny Ings and Mohamed Elyounoussi – who both appeared sharp off the bench in the second half – have a lot to do if they are going to really improve Hughes' side.

Ings did at least look hungry, chasing down lost causes and heading over from a corner with 12 minutes left.

But their squad is not particularly deep and there was not much inspiration from those who did start.

Pat on the back: McCarthy stands firm

In a match of few standout performers, Southampton's goalkeeper was steady between the posts and made several good saves, particularly when denying Lennon and Tarkowski in the first half. Saints signed Angus Gunn for a reported £15million in pre-season, but on this showing the former Manchester City youngster will find it hard to get a game.

Austin will certainly have grievances with the service to him, but at the same time the burly striker's hold-up play was poor and he often looked entirely disinterested. Saints did not really look potent in attack until Ings' introduction in the second half.

Saints' first away trip of season on Saturday sees them travel to Goodison Park to face Everton, while Burnley will host Watford a day later following Thursday's Europa League qualifier against Istanbul Basaksehir.