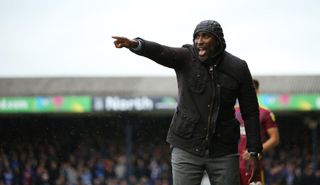 Sol Campbell’s reign as Southend manager started with a 3-1 defeat to high-flying Ipswich at Roots Hall.

The former England defender took over the League One strugglers earlier this week and watched on as his new side were hammered 7-1 by Doncaster.

But Campbell was unable to make an immediate impact as he took to the dugout with Ipswich good value for their win as they returned to the top of the Sky Bet League One table.

The Shrimpers did have an early Rob Kiernan header ruled out for offside but Paul Lambert’s side soon hit their stride.

Ipswich opened the scoring in the eighth minute when James Norwood latched onto Kayden Jackson’s through ball to fire home with Southend goalkeeper Mark Oxley rooted to his line.

Norwood grabbed his second to double the lead in the 70th minute when Jackson’s left-wing cross picked out the striker who sent a low, left footed shot into the bottom right hand corner of the net from 12 yards.

Six minutes later, Ipswich made it 3-0 with Jackson firing home after Jon Nolan’s effort had been parried out by Oxley.

The Shrimpers netted a consolation effort in the 83rd minute with substitute Emile Acquah scoring from close range.