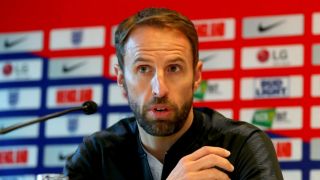 Southgate's youthful side overshot expectations to reach the semi-finals of Russia 2018, where they were beaten 2-1 by Croatia in extra time.

England face Croatia again next month in the inaugural Nations League and kick-off their campaign against Spain at Wembley on Saturday.

A sold-out home crowd is set to provide a celebratory atmosphere on the back of England's exploits in Russia but, even in light of the euphoria that fostered, Southgate is not losing sight of the bigger picture.

"We want to test ourselves against the best," he told a pre-match news conference.

"We weren't hiding from those fixtures in friendlies but our record against top teams in competitive games is non-existent. It is not impressive, bar Argentina in 2002 [in the World Cup group stage].

"It is very rare since 1970 we have beaten those top teams. Ideally over the next couple of years we want to get a record of beating top teams."

Speaking alongside captain Harry Kane – who will be presented with his World Cup Golden Boot before the Spain game – Southgate acknowledged there should be plenty of improvement to come from his team.

The have arrived in London – Gareth and Harry are speaking to the media right now. September 7, 2018

"Over the summer you're looking for results," he said. "Now it's about improving as a team, improving the way we play, improving the tactical detail of how we play and testing ourselves over the next few months against some really top teams.

"For us now, the summer is finished. It's about the next step and the next challenge. Sport doesn't stand still for anybody.

"I know the players are of the same mentality - they're of an age where the next thing is the most important thing."

Southgate's words sounded a clear note of realism amid the lifted expectations of recent months but he is not ready to dampen a hard-won feelgood factor.

"It’s great there is this excitement about international football again," he said. "One of our ambitions over the last year or so has been to get back that connection with the supporters.

"It's a much better environment for the players, to feel that warmth and that goodwill.

"A year ago when we qualified [for the World Cup] there were paper aeroplanes on the pitch and we were thinking, 'What are we doing here?'."

It is unlikely to be a question anyone wearing three lions will ask themselves when they step out at Wembley this weekend.