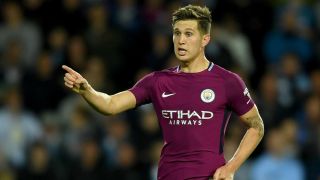 John Stones believes England have the players to replicate Manchester City's brand of football but insists results are more important than style.

Pep Guardiola's side produced another strong display in their 1-0 win over Chelsea at Stamford Bridge last Saturday to move back to the top of the Premier League, ahead of Manchester United on goal difference.

City have scored 22 times and conceded just twice in their opening seven league matches, which have yielded six wins and one draw, and have won plenty of praise for their performances this term under the former Barcelona boss.

Stones says that style of play is suited to international football but is not prepared to compromise results in order to play the same way with England.

"We've got the players to do it," said the centre-back. "It's difficult to bring how you play in the Premier League into international football –  it's so different –  but we're always striving to become better and there's a lot of likeness between how City play and international football. Or to how Tottenham play. But to gel all those things is very difficult.

"As long as England win and keep clean sheets and keep bettering ourselves every year and making the nation proud, that's all that matters."

Stones believes he is developing well under the tutelage of Guardiola, having produced what he thinks is one of his best performances in the win at Chelsea.

"I think I've always been moving in the right direction," he said. "Everyone has their ups and downs.

"We've started this season well as a team at club level. It was an important match against Chelsea to keep the run going and keep another clean sheet. Defensively, on a personal note, it was maybe one of the best games I've played in.

"Pep has been really good. Always positive and wanting me to do better and that's what I try to repay him on the pitch. I feel like I'm developing as a player and a person under him."

England face Slovenia at Wembley on Thursday knowing a win will guarantee their place at the World Cup finals next year.