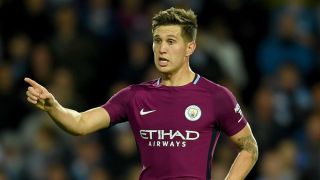 John Stones says Manchester City have only themselves to blame for their shock FA Cup defeat to Wigan Athletic on Monday.

A second-half goal from Will Grigg secured a 1-0 win for the League One side at the DW Stadium and ended hopes of a quadruple for Pep Guardiola's side.

Stones admits it has come as a major blow to the squad, coming just six days before their EFL Cup final meeting with Arsenal at Wembley.

"They got one chance and scored it. It's our own fault we're out of the FA Cup," said the centre-back, as quoted by City's official website.

"We want to be competing in all four competitions until the end. It was a final for us but it's never easy, coming away to a lower league team with the conditions and everything that comes with it.

3 - Tonight was only the third time Manchester City have failed to score in a match this season, with lower league sides resposnsible for two of those (Wolves and Wigan). Blanks.February 19, 2018

City's task was made more difficult when Fabian Delph was sent off towards the end of the first half, but the visitors still dominated proceedings, managing 82.5 per cent of the possession and 29 shots compared to Wigan's four.

Although Stones feels the red card had an impact, he maintains the runaway Premier League leaders did enough at least to force a replay.

"It was a difficult one. Obviously, the sending-off was a big factor in the game but I thought we deserved to get a replay at least," he added.  "They had one chance and scored.

"The sending-off had a big effect. You need 11 players on the pitch at all times. I can't say whether it was a red card or not as I haven't seen it.

"It's one of those things and you have got to deal with it and carry on. I thought we dominated the game and created a lot of chances and we should have won it."