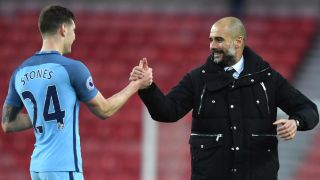 England defender John Stones will have a direct line to Pep Guardiola during the World Cup as he aims to make up for a "difficult" Euro 2016.

Now an integral member of Gareth Southgate's back three, Stones is set for his first minutes at a major tournament after going unused by Roy Hodgson two years ago.

The then-Everton player watched from the bench as England scraped through the group stage in France before crashing out to Iceland in a deflating last-16 defeat.

He has since blossomed into a Premier League winner under Guardiola at Manchester City and the 24-year-old will look to his club boss for guidance in Russia.

"I will definitely speak to him in the tournament. He's very open," Stones told reporters.

"He said we can call him or text him whenever we need to, 24 hours a day.

"He's always said that which is brilliant of him as a person in my opinion. Even if it's not football-related. That's important."

Stones has played under Guardiola for the past two seasons and attributes his greater importance for England to the Catalan's influence.

"Mostly Pep! Definitely Pep, the players I'm playing with at club level, and obviously becoming more mature, knowing myself and knowing the game better," he said.

"I think the thing for me is how he has made everything so simple. He has taken my footballing brain to another level.

"Everyone thinks they know football and different systems but when I turned up at City and trained with him it was like a new door opening that I never thought would be there."