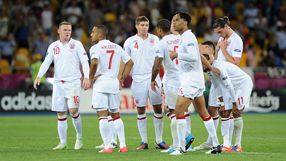 Beaten only once, and then on penalties, England were finally, but deservedly, eliminated 4-2 in the shootout by a superior Italy team after riding their luck in a goalless draw at the end of extra-time in Sunday's quarter-final in Kiev.

Having slogged through a 1-1 draw with France and then overcome Sweden 3-2 with a late goal before beating co-hosts Ukraine 1-0 in demanding Group D games that stretched them to their limits, it was clear England exceeded expectations.

But their dignity under duress and the promise of a clutch of younger players introduced by new manager Roy Hodgson should ensure he continues to retain the confidence of the squad and is afforded cordial treatment by the media.

Two years on from England's sorry exit at the 2010 World Cup finals, when they left Rustenberg in disarray after a 4-1 thumping by Germany, Hodgson should take satisfaction from steadying what appeared to be a rocking, if not mutinous, ship.

Former manager Fabio Capello's lack of command of the English language and the complex relations within the group had left Hodgson, appointed on May 1, with an awkward task and a need to make several difficult decisions.

He took on the challenge and made his calls with shrewdness and courage, backing selections like defenders Glen Johnson and John Terry against the views of his critics.

Their performances, and those of the squad in general including newcomers like forward Danny Welbeck, justified Hodgson's choices, even if they lacked inspiration thanks to the dearth of imaginative, creative players.

Not even the return of rusty striker Wayne Rooney, who was suspended for the opening two group games, could inject any vim into a blunt attack and dull team.

It is unlikely that injured absentees like midfielders Jack Wilshere or Frank Lampard would have made much difference.

After the 2010 World Cup, Capello's future was called into doubt but he was retained, if not with a resounding vote of confidence, before choosing to depart in February this year.

Given that backdrop, and only two warm-up games, Hodgson did much as expected by sticking to a pragmatic and defensive approach as England went unbeaten, barring Sunday's penalty loss, through their first six games under his control.

For Hodgson, the greatest problem - and biggest challenge - is to find gifted, dynamic midfield players so that, if England qualify for the 2014 World Cup finals, they can go to Brazil and play football that is brighter than the turgid, industrial game on display at Euro 2012.

England showed they have a fine goalkeeper in Joe Hart, can defend stoutly and are well-organised, but they rarely crossed the halfway line with distinction or purpose and, overall, demonstrated a lamentable lack of technique and passing ability.

In four games, they failed to enjoy even 50 percent of the possession - statistics that prove England are unable to ret