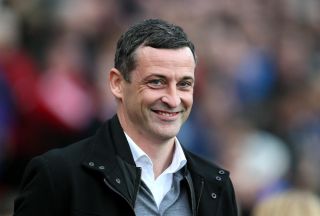 Sunderland boss Jack Ross is refusing to let the pressure of the League One play-offs get to him as looks to make the most of a second chance.

The Black Cats saw their hopes of automatic promotion back to the Sky Bet Championship go up in smoke after their final seven games yielded just one win and only six points.

As a result, the first leg of their play-off semi-final clash with Portsmouth on Saturday evening has proved a hard sell with disappointed fans and left Ross and his players facing a degree of criticism, although the Scot is taking that squarely on his shoulders and is determined to enjoy what lies ahead.

He said: “It shouldn’t be hell, otherwise you’re in the wrong job.

“Is there an anxiety and stress about being a football manager? Yes, of course there is, but that should be the same for any manager at any level because it just goes with the territory.

“But the only way you really enjoy it is if you win it. I know it’s very cliched, but it’s the truth.”

Sunderland and Pompey have already met on three occasions this season, with Kenny Jackett’s men winning 3-1 at Fratton Park in December after the visitors had seen defender Glenn Loovens dismissed shortly after half-time and drawing 1-1 on Wearside last month in the league, and lifting the Checkatrade Trophy at Wembley courtesy of a penalty shoot-out victory in between.

Winger Aiden McGeady has played in all three games and is expected to return this weekend after being given time to rest a foot fracture with which he had been playing, but only after having pain-killing injections.

Ross said: “He’s achieved a lot in his career but he’s determined to achieve promotion with us this season, and he knows that when he’s on the pitch he helps us do that.”

Both sides, like potential final opponents Charlton and Doncaster, know they have a major opportunity ahead of them, and Jackett has urged his players not to pass it up.

He told the Portmouth’s official website: “It’s a chance to get into the Championship and that’s a big prize for whoever emerges successful from the four sides.

“We’re pleased to be in there with a shot and every player here knows we have to attack what’s ahead of us.”