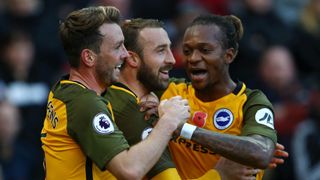 Glenn Murray continued his rich vein of form as Brighton and Hove Albion inflicted a 1-0 defeat on Swansea City, who dropped into the Premier League relegation zone.

Murray struck for the fourth time in three Premier League matches to guide Chris Hughton's side up to eighth and make it back-to-back top-flight away wins for just the second time in their history.

While the Seagulls are soaring above expectations, a fifth defeat in six league outings was met with boos from the Liberty Stadium crowd and raises the pressure on Paul Clement, who will need positive results in their next outings against Burnley and Bournemouth, whose late win at Newcastle United leaves the Swans in the bottom three.

A one-minute brain fade for erratic centre-back Federico Fernandez preceded the only goal - the Argentine was booked for a wild and needless tackle on Murray before the striker evaded his man to bundle home.

Swansea struggled to create chances and had Lukasz Fabianski to thank for keeping the deficit to a single goal at half-time as he turned a powerful Lewis Dunk header over the top.

The best opportunity for the hosts fell to Luciano Narsingh, but he hit the crossbar in the second minute of stoppage time, as Brighton claimed all three points.

With chances at a premium, Fabianski did well to palm a looping, left-wing delivery by Pascal Gross that looked destined for the top-right corner behind while under pressure from Duffy.

There was nothing Fabianski could do to keep out Murray in the 29th minute, though, as the striker got in behind the static Fernandez to turn Anthony Knockaert's cross home with his thigh.

Brighton came close to doubling their lead four minutes later when Dunk powered a header straight at Fabianski, who reacted well to push it over.

Jordan Ayew and Abraham had shots blocked in a goalmouth scramble from the following corner, Brighton doing well to quickly regain their composure.

Clement sent Narsingh on for Tom Carroll in an attacking change before the hour mark, but the visitors sat back and defended well to restrict the opportunities.

Murray was replaced by Tomer Hemed in the 78th minute and the Seagulls came under increasing pressure as Swansea pushed for an equaliser.

They came closest in stoppage time when Abraham slipped in Narsingh, but the Dutchman's powerful drive rattled the bar to leave Swansea deflated at the final whistle.