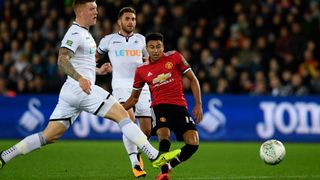 Jesse Lingard was at the double as Manchester United bounced back to winning ways with a 2-0 defeat of Swansea City in the EFL Cup fourth round.

The 24-year-old produced a pair of clinical finishes either side of half-time as Jose Mourinho's men issued a composed response to their shock Premier League loss against Huddersfield Town.

Both teams rung the changes from their respective weekend defeats, although Victor Lindelof was promoted to the starting XI, despite a shaky display as a first-half substitute at the John Smith's Stadium.

In truth, the Swede was rarely tested by a Swansea side perhaps focused more on their upcoming Premier League trip to Arsenal.

Lingard, who scored in the final as the Red Devils won this competition last season, quickly put any nerves to bed by coolly slotting away the opener after 21 minutes.

And the winger capped a comfortable return to type for the reigning champions just prior to the hour, sealing a quarter-final berth and getting Mourinho's men back on track ahead of a visit from Tottenham.

Shifting to a 3-5-2 system, Mourinho handed starts to youngsters Axel Tuanzebe and Scott McTominay as two of seven changes to the team which was stunned on Saturday.

The visitors found early fluency despite the adjustments as Chris Smalling nodded wide from a corner inside two minutes, before Kristoffer Nordfeldt tipped over a rising Lingard shot.

England international Lingard went one better in the 21st minute when, put clean through on goal by a delightful Marcus Rashford flick-on, he unerringly side-footed into the bottom right corner.

Swansea did come close to a fortuitous equaliser on the half-hour with Daley Blind's unconvincing header ricocheting past the post off Oliver McBurnie.

Instead, Paul Clement's side suffered another setback as Martin Olsson was forced off with a suspected hamstring injury before half-time.

in action for on his first competitive start of the season. October 24, 2017

United were content to take the sting out of any potential comeback by soaking up possession in the lead up to the hour.

The winger could well have completed his hat-trick in quick time, but fired across the face of goal from a narrow angle following McTominay's clever pass.

Swansea's angst would hardly have been helped by the introduction of Romelu Lukaku, although they did receive a let-off when Tuanzebe poked over the bar from close-range.

Clement threw on an attacking ace of his own in the shape of Tammy Abraham and the Chelsea loanee saw a firm effort pushed to safety by Sergio Romero, who also saved from Leroy Fer at point-blank range in stoppage time, denying Swansea a consolation as they switch attention back to their flailing league campaign.