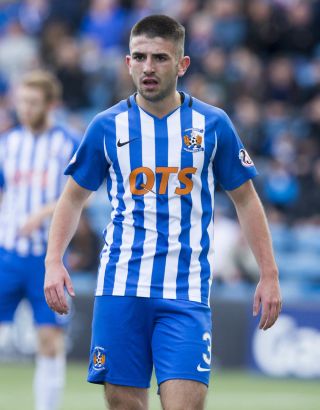 Scotland newcomer Greg Taylor knows Steve Clarke will not change for the international environment – and is certain the tried and trusted methods will yield results.

As one of four Kilmarnock players in the first Scotland squad Clarke picked, Taylor has witnessed familiar methods and approach from his former club boss.

Clarke has pencilled in double sessions all week in a bid to transmit his message to players before Saturday’s Euro 2020 qualifier against Cyprus.

And Taylor is confident the team will reap the rewards of hard work, as Killie did during 20 months under Clarke which saw them twice break their top-flight points record, produce their best league finish since 1966 and qualify for Europe for the first time since 2001.

The left-back said: “The gaffer won’t change for no-one. He is his own man, that is for sure. I have certainly seen that, there is no difference.

“We know what the gaffer can do, we have worked under him for 18 months and learned an awful lot, and I think he can only benefit the rest of the players. I’m sure they will enjoy it, his training is spot-on.

“He will definitely give us a base to start with, he will work from his back four up and have a solidity. We will be harder to beat, I hope, and probably have a goal threat hopefully to go and win games.”

Taylor is an experienced international at under-age level, and is the only Scotsman to score a winner against Brazil, in an under-20s encounter at the Toulon Tournament in 2017.

And the 21-year-old is determined to prove he belongs in the senior international ranks.

“I would say it was probably a step-up,” he said after his first training session. “It was noticeable, but enjoyable certainly. Once you are playing with that higher calibre of player, you are only going to improve from it.

“I don’t think there would be any point turning up if you didn’t feel you belong, I am quite self-assured.

“To play for your national team is the dream of any young boy playing football, so to be called up is a massive honour. I was very appreciate to the gaffer for calling me up. But now that I’m here I am wanting to show in training that I’m ready to take the chance if needed.”

However, Taylor accepts he has the toughest job in Scottish football trying to win a place at left-back ahead of Liverpool’s Andy Robertson and Celtic’s Kieran Tierney. The latter and Leeds left-back Barry Douglas missed out on the squad for the double header against Cyprus and Belgium through injury.

“It is fair to say,” Taylor said of his task. “But how good is it for Scottish football? Andy just winning the Champions League is amazing. It’s fantastic for the whole country.

“Is there any better than him in my position? So I can only benefit from seeing what Andy does in training and in games.”

But Taylor will not be too proactive in seeking advice.

“I’m sure he gets bothered enough off other people so I will let you ask the questions and just watch him,” he said.