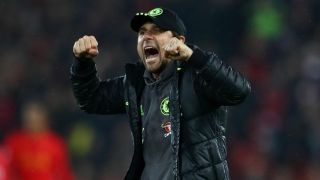 Antonio Conte's long-anticipated departure from Chelsea was confirmed on Friday.

The former Italy and Juventus boss led the Blues to a dominant title triumph in his first season at the helm, but the cracks soon started to show between himself, key players and the Chelsea hierarchy in the aftermath of 2016-17.

Running battles continued throughout last term, most notably with Manchester United boss Jose Mourinho and, although Conte lifted the FA Cup by besting his rival at Wembley, the situation proved beyond repair.

Here we look back at the highs and lows of the 48-year-old's Stamford Bridge reign as compatriot Maurizio Sarri waits in the wings.

Chelsea's start under Conte was mixed, with three opening Premier League wins followed by a draw at Swansea City and defeat to Liverpool. They looked anything like champions-elect during a first half collapse at Arsenal, with Arsene Wenger's men romping into a 3-0 lead at the break. At that point, Conte switched to his favoured 3-4-2-1 system. A damage-limitation job in the second half preceded the record-breaking 13-match winning streak that would propel Chelsea towards the title.

Storming past City and United

The seeds of Conte's Mourinho feud were sewn during a 4-0 thrashing of United at Stamford Bridge. Pedro opened the scoring inside 30 seconds and there was little let-up from then on, with Conte's boisterous celebrations irking his opposite number.

The first hour of Chelsea's match at the Etihad Stadium in December was not so routine, with a Gary Cahill own-goal putting Manchester City ahead. Kevin De Bruyne clattered the crossbar from close-range in what would prove a 'Sliding Doors' moment in the season. Diego Costa, Willian and Eden Hazard scored inside the final half hour and City ended the match in disarray, with Sergio Aguero and Fernandinho sent off for violent conduct.

Champions, but no double

By the turn of the year, it was simply a case of Conte's frontrunners keeping their heads. They did so with minimal cause for concern, ending the campaign with a then-record 30 wins from 38 games. Cahill's performances as captain meant John Terry could be put out to pasture, Cesar Azpilicueta was the Premier League's outstanding defender, Victor Moses and Marcos Alonso were revelations at wing-back and N'Golo Kante's tireless midfield mastery laid the platform for Hazard and Costa – the velvet glove and steel fist of Chelsea's attack.

A double seemed inevitable but Arsenal were brilliant in winning the FA Cup final 2-1 at Wembley. Pretty soon afterwards, the storm clouds gathered.

A stand-off between Costa and Conte concerning the player's apparent desire to move to the Chinese Super League mid-season saw the coach prevail. But it was a marriage of convenience and, despite Costa professing a desire to stay at Chelsea after the cup final, Conte infamously informed the striker he was no longer required via text message. For all the obvious faults, at least that element of Chelsea's transfer dealing was clinical. An assortment of squad filler arrived, for whom Conte made little effort to disguise his contempt. Any questions about recruitment were deflected away, with the Italian insistent the board and not him should provide answers. And, after a promising start, Costa's replacement Alvaro Morata flopped.

The frustrations of Chelsea in 2017-18 were laid bare in the group stages of the Champions League. A 2-1 win at Atletico Madrid, with Hazard at his magisterial best, showed just what Conte's side were still capable of. By contrast, they resembled a rabble in a 3-0 loss at Roma that saw David Luiz jettisoned from the first-team picture by his seething coach.

This unseemly spectacle has been raked over plenty of times already. From the references to "Demenza Senile" and match-fixing suspensions, neither man came out of it smelling of roses. But most significantly, as the row rumbled on, Chelsea's form collapsed. From January 4, when Mourinho irked Conte with the remark "I don't behave as a clown on the touchline" to their 2-1 loss at Old Trafford, Chelsea won twice in the Premier League and were dumped out of the EFL Cup (Arsenal, again) and the Champions League.

Signing off with the FA Cup

Conte at least managed the final word as far as Mourinho was concerned. Hazard won and converted a first-half penalty that secured the FA Cup with a 1-0 victory. As he stood on the Wembley turf drenched in champagne, however, this was already a triumph tinged with regret of the denouement to come.