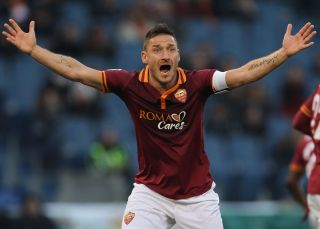 Rudi Garcia's side sit second in Serie A, eight points adrift of Juventus who are gunning for a third consecutive league title.

Juventus' hopes of a league and cup double were curtailed on Tuesday, however, as Gervinho's 79th-minute winner saw Roma book their place in the last four of the Coppa Italia.

The win was particularly sweet for Roma, who lost 3-0 to Antonio Conte's charges in the league earlier this month, and Totti believes there is little to choose between the two.

"This was a win that we wanted to get at all costs," Totti said.

"We want to bounce back from our defeat in Turin and we proved to be at the same standard as Juve.

"In my opinion, there is not much difference between us and them even though they have a good lead in Serie A.

"We are having a fantastic season but they are doing better than us."

Goalscorer Gervinho was thrilled with his match-winning goal, and reckons the victory represented revenge for the league loss.

He added: "I am truly happy, because I scored and because we played well.

"It was very exciting for me and it wasn't easy to play against Juve, as they were well-covered.

"We avenged the game played on January 5."