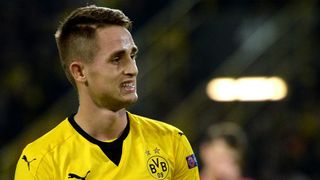 Borrusia Dortmund head coach Thomas Tuchel has criticised Adnan Januzaj, saying the Manchester United player did not display the correct attitude during his loan spell in the Bundesliga.

The 20-year-old, who joined BVB in August, had his season-long loan cut short by mutual agreement this month after he failed to start a single league match.

United manager Louis van Gaal had warned Januzaj that a move to Dortmund might not be a wise move if he wanted first-team football, but will now give him a second chance at Old Trafford.

Tuchel was not impressed with the Belgium international's brief spell in Germany, highlighting the young forward's mental approach as a reason for his failure.

"It is a pity he did not show the desire and attitude you need to progress at his age," the BVB boss said to Sportbild.

"My feeling was that he never was completely with us, that a part of him always stayed in Manchester and he compared everything here with United.

"We were not able to help him to shake that off."

Van Gaal has told Januazaj that he must prove his fitness with United's Under-21 side before earning a first-team recall.