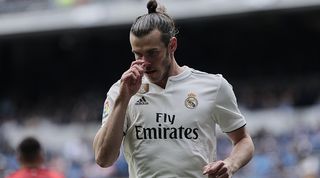 Gareth Bale could be returning to Tottenham as part of a loan deal as doubts grow over the Wales international’s future at Real Madrid, the Sun says. It is thought the 29-year-old has fallen out of favour with boss Zinedine Zidane, with the Spanish giants said to have now offered the £600,000-a-week star a cut-price £10 million season-long loan at his former club.

Sticking with Tottenham, and according to the Mail, the club are eager to get a head start on their transfer targets and are hopeful they can quickly complete a move for Fulham’s Ryan Sessegnon. But the 18-year-old’s £40 million price tag could hold up proceedings, as the paper reports that Spurs only want to fork out £25 million.

Despite settling the Premier League title race at the weekend and in contention for a domestic treble, Manchester City are still looking at possible targets to strengthen their squad for next term, the Mail reports. According to the paper, Pep Guardiola has set his sights on bringing in four new players – with the summer raid set to cost up £200 million.

Arsenal are reportedly hoping to keep hold of Matteo Guendouzi for the long term after an impressive first season at the Emirates. The Gunners will reward the 20-year-old French midfielder with an improved £75,000-a-week contract, extended to 2023, the Mirror says.

Leicester look to replace Maguire with Tarkowski this summerhttps://t.co/rMwSLqglV2pic.twitter.com/TF5opryGES— The Sun Football  (@TheSunFootball) May 12, 2019

Eden Hazard: With the midfielder’s Chelsea departure looking ever more likely, the Mail reports that Real Madrid are confident they will land the 28-year-old in time for pre-season.

Nicolas Pepe: The Lille striker is said to be a top target as Ole Gunnar Solskjaer turns his attention to rebuilding his Manchester United squad after a disappointing end to the season, but the Norwegian could face competition from PSG and Arsenal, the Mirror reports.