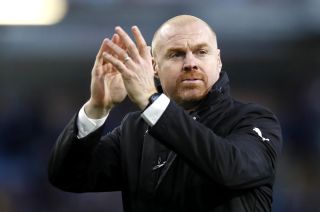 Sean Dyche says Burnley’s turnaround this season has left him feeling more satisfied as a manager than he was at the end of the previous campaign.

The Clarets boss guided the club to seventh place in the Premier League in 2017-18, their highest top-flight finish since 1973-74 and one which gained them a place in the Europa League qualifying rounds.

This term they were 18th with 12 points after their first 19 games – the last of which was a 5-1 home loss to Everton on Boxing Day – before taking a further 28 from the 17 that have followed.

Speaking ahead of Burnley’s trip to Everton on Friday, Dyche, whose men are now 15th with their survival confirmed, said: “It’s been a very tough season and a very rewarding season actually for me as a manager, for my staff and the players.

“Things were not right obviously, result-wise particularly, up until the turn, and (there was) a lot going on.

“But to come through that and have the clarity and the work and the belief in what we do, to come through it with the points we have on the table in the second half of the season is really, really pleasing for me as a manager.

“And arguably, strangely – people wouldn’t think it – one of my best achievements I think, to stay true to what we believe, stay true to the staff and the players, and keep working at what we do to make sure we turned things around. And the players deserve a massive amount of credit in that of course.”

When then asked if he was as satisfied with this year as he was with last year, Dyche said: “Way more satisfied as a manager.

“But when they are not going right for you, how do you change it? How do you turn that around, work with your staff and the players to make sure that turnaround happens?

A particularly notable change that Dyche made after the 5-1 loss was dropping goalkeeper Joe Hart and replacing him with Tom Heaton, who has played in every league game since.

It was reported over the weekend that Hart, signed last August from Manchester City, could be allowed to leave Burnley for free this summer.

Dyche was asked on Wednesday how he saw things developing over the summer in terms of Burnley currently having three England goalkeepers, Nick Pope being the other.

And he said: “We’ll see. There’s no crystal ball.

“They all want to play. I think it will work itself out one way or the other. There’s no other plan at the moment to have three competitive keepers, because we have got them.”

Dyche also said Peter Crouch, Phil Bardsley and Robbie Brady could all be back involved on Friday. Crouch and Bardsley have been sidelined due to an appendix operation and cut leg respectively, while Brady missed the 1-0 loss to Manchester City last time out to be at the birth of his second child.