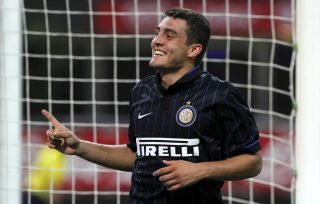 Leading 3-0 from the first leg in Iceland last week, the Serie A giants were in complete command of the tie and the gulf in class was evident at San Siro as Inter advanced 9-0 on aggregate.

Youngster Kovacic opened his Inter account by scoring twice in five first-half minutes - the second a wonderful individual effort - as Inter built on their first-leg advantage in the opening period.

Pablo Daniel Osvaldo also netted his first for the Milan club when he added a third two minutes after half-time and Kovacic completed his treble with an effort from distance.

Kovacic was replaced by Mauro Icardi shortly afterwards and the Argentinian added a brace himself to complete the rout.

The win will come as a welcome boost for Walter Mazzarri and his men ahead of their Serie A opener at Torino on Sunday.

Inter made a dominant start and came close to an opener in the 12th minute when Osvaldo headed Yuto Nagatomo's left-wing delivery against the crossbar.

Osvaldo had another chance a minute later, but this time the Italy international was denied by a superb last-ditch block.

Inter eventually took the lead in the 28th minute when Kovacic pounced on a loose ball inside the area to prod home from six yards.

If his first was scrappy, Kovacic's second goal was anything but.

After evading two desperate challenges on a surging run towards goal, the Croat dinked an impudent finish over the onrushing Ingvar Jonsson in the 33rd minute.

Following his toils in the first half, Osvaldo got his reward at the start of the second with a fine glancing header from another pinpoint Nagatomo cross.

The Japan international was the creator again in the 51st minute, storming away down the left before finding Kovacic, who fired into the bottom right-hand corner from 18 yards to complete his treble.

Osvaldo broke clear in search of his second three minutes later, but this time he was denied by a sprawling Jonsson.

Icardi added further gloss to the scoreline in the 69th minute with a fine turn and shot that arrowed low inside the right-hand post.

The forward rounded off the scoring 10 minutes from time by holding off a challenge and lifting the ball over Jonsson, completing a dominant Inter performance.