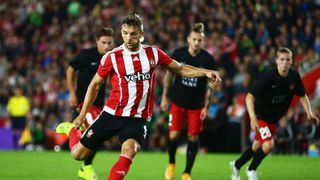 Henrikh Mkhitaryan's late winner completed an incredible turn-around as Borussia Dortmund came from three-goals down to beat Odd 4-3 in Norway.

Tippeligaen outfit Odd, in Europe for the first time since 2004, took the lead after just 14 seconds through Jone Samuelsen.

Quick-fire goals from Fredrik Nordkvelle and Espen Ruud put the hosts 3-0 up inside 22 minutes.

However, Pierre-Emerick Aubameyang's double either side of Shinji Kagawa's strike levelled proceedings for Dortmund, who hit the woodwork four times, before Mkhitaryan headed in their fourth with seven minutes remaining.

Former Southampton academy player Tim Sparv had fired the visitors ahead midway through the first half, but Rodriguez, who only recently recovered from a long-term knee injury, made no mistake from the penalty spot following a foul on James Ward-Prowse.

Meanwhile, Robin van Persie snatched a dramatic 90th-minute winner for Fenerbahce in the closing stages of their clash with Atromitos.

The Netherlands international came off the bench with just ten minutes to go, and sealed a 1-0 win for the Turkish giants with a well-placed header from Caner Erkin's cross.

Athletic Bilbao, perhaps jaded from their Supercopa de Espana triumph over Barcelona, lost out 3-2 to Zilina, with Brazilian forward William grabbing a last-gasp winner, while Astra beat AZ Alkmaar by the same scoreline.

Viktoria Plzen and Lech Poznan both sealed 3-0 home wins against Vojvodina and Videoton respectively, and Rosenborg saw off Steaua Bucharest 3-0.

Arkadiusz Milik's penalty was enough to give former winners Ajax a 1-0 win over Jablonec, with Norwegian champions Molde beating Standard Liege 2-0 at home.

Rubin Kazan could only manage a 1-1 draw away at Rabotnicki, with St-Etienne doing the same against Milsami, though Ligue 1 rivals Bordeaux fared better as they beat Kairat 1-0.

There were 1-0 wins for Legia Warsaw, Belenenses and Liberec against Zorya, Altach and Hajduk Split, while Panathinaikos' trip to Qabala finished goalless.