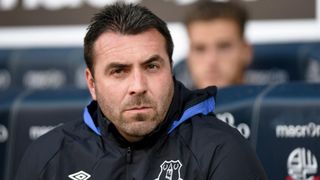 Koeman was dismissed on Monday in the wake of Sunday's 5-2 hammering by Arsenal, leaving Everton in the relegation zone despite spending a reported £142million in the close-season.

Everton have won just two of their first nine league matches, while they also sit bottom of their Europa League group.

Unsworth, who is in charge of Everton's Under-23s, played the best past of 11 years at Goodison Park across two spells and has been linked to the club in a coaching capacity since 2013.

He will likely be hoping to stake his claim for taking the role permanently, but Burnley manager Sean Dyche is considered the favourite.