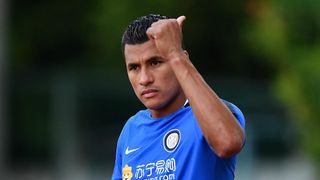 Jeison Murillo has agreed a two-year loan from Inter to Valencia, with the deal including a mandatory purchase option.

"Valencia have reached an agreement with Inter for the transfer for two seasons with a mandatory purchase option for the Colombian international defender Jeison Murillo," a statement from the Liga side said.

Murillo became Valencia's second major signing on Friday, with the club having already snapped up Brazilian defender Gabriel Paulista from Arsenal, and both players will be presented on Saturday.

Valencia are also expected to complete a move for Murillo's former Inter team-mate Geoffrey Kondogbia, who has fallen out of favour at San Siro.