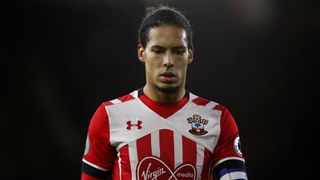 Virgil van Dijk is not for sale and will be welcomed back into the Southampton squad when he accepts this state of affairs, according the Premier League club's chairman Ralph Krueger.

Netherlands centre-back Van Dijk is pushing for a move away from St Mary's Stadium, having handed in a transfer request last week.

He is a reported target for Liverpool, Chelsea and Manchester City, despite the Anfield club making a public statement declaring they had ended their interest in the 26-year-old in June amid allegations of an illegal approach.

Liverpool have already been the beneficiaries of signing prime Southampton talent during previous transfer windows, with Adam Lallana, Dejan Lovren and Sadio Mane all key members of Jurgen Klopp's squad.

But Krueger told the Southern Daily Echo that Southampton are now in a position to retain their prized assets and, as such, Van Dijk is not going anywhere.

"Our stance remains based on our strategy from May when we spoke last," Krueger said.

"I already told you the numbers that we have transferred in and transferred out and it is time to stop that.

"We really thought this was a good summer for that. The strength of the contracts, age of the group and the experiences of last year, like going to a cup final [the EFL Cup], gave us the feeling this is a group that tasted winning and keeping them together would give us the chance to reach another level.

"Virgil is not the only player that is involved in this; he is part of the whole strategy of not selling. Nobody is for sale that we don't want to sell, so he is not for sale in this window. We have said it more than once."

Southampton played out a goalless draw with Swansea City in their opening Premier League game of the season last weekend – a first at the helm for boss Mauricio Pellegrino.

Krueger praised the manner in which the Argentinean has dealt with the Van Dijk saga during his initial weeks in charge.

"Mauricio has done an amazing job of dealing with this situation," he added.

"It has not disrupted our team. It has not in any way caused a lack of focus in training, in the locker room, and of course everybody will open their arms when Virgil comes back and we go at it."