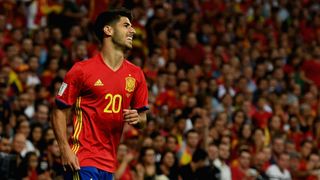 The 21-year-old could have chosen to represent Netherlands through his Dutch mother, but the exciting Los Blancos winger has never represented the country at any level.

Instead, Asensio played for Spain through the youth categories before making his senior debut against Switzerland in 3-1 victory in May 2016.

Things could have been very different had he succumbed to Netherlands' advances when Van Nistelrooy made the call, though Asensio is adamant he never wavered from his Spain dream.

"I was called by Van Nistelrooy to play for Netherlands," Asensio told Cope.

"I talked to him for a while, then he passed me to the head coach and he told me that they wanted me at all costs.

"[But] I really did not hesitate [in committing to Spain]."