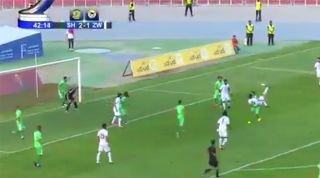 Heading into the 43rd minute, Al-Shorta were 2-1 up. Yet just a few minutes from half-time, Rahim provided the equaliser for Al-Zawra'a in front of an excitable crowd at the Al-Shaab Stadium.

A corner to the far post was whipped back into the penalty box, before being nodded back into the centre. Holding midfielder Rahim was there to pick up the ball and, without a moment's hesitation, flick it up before pulling off a stunning overhead kick into the bottom corner.

Rahim's team-mates bundled him to the ground in front of a jubilant home support, but there would be no victory to celebrate – a lack of goals in the second half meant it finished 2-2.