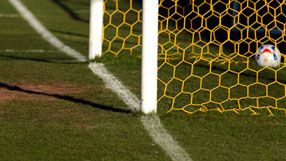 As part of the licensing agreement, the two companies have also had to take out liability insurance in case their equipment makes a wrong decision or injures a player.

"A claim is deemed as a demand for compensation of bodily injury, property damage and pure financial loss. The policy shall be concluded with a well-respected and reputable national or international insurance company."

The announcement came a year after FIFA began an exhaustive search for systems which could reliably detect whether or not a ball had crossed a goal-line.

"Between October 2011 and June 2012, both companies passed a series of extensive laboratory and field tests, tests in simulated match situations, as well as tests in live matches," FIFA's statement said.

Football's rule-making body, the International Football Association Board (IFAB), approved the use of the technology in July following a series of incidents in which referees failed to see that the ball had crossed the goal-line.

The most infamous "phantom goals" were Frank Lampard's shot for England in the World Cup second round match against Germany in 2010 and Sulley Muntari's effort for AC Milan in a top-of-the-table Serie A clash against Juventus last season.

The latter incident had a decisive impact on the outcome of the championship as Milan, winning the match 1-0 at the time, were eventually pegged back to 1-1 after conceding a late equaliser. Juventus went on to win the title.

FIFA said both systems still had to pass tests in stadiums where they had been installed before they could be used for official matches.

"Once a system has been installed in a stadium, the system undergoes a final inspection to check its functionality," it said.

"This is carried out by an independent test institute and the results of this so-called 'final installation test' must be successful.

"Only a positive final installation test qualifies a system to be used in official matches."

Goal-line technology is due to make its debut at the Club World Cup in Japan in December.

FIFA plans to use the GoalRef system in one of the two stadiums used for the competition and Hawk-Eye in the other.