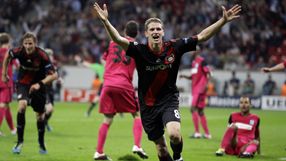 Ballack, who turned 35 on Monday, has struggled to find his form at Leverkusen this season after his international career was unceremoniously ended by coach Joachim Low in June but he made an instant impact after coming on in the 80th minute.

The former Germany captain first helped to settle down a nervous-looking Leverkusen side in the waning minutes. He then chested down a loose ball some 16 metres in front of the goal and blasted a partially deflected shot from the left into the far righthand corner.

Bender had scored from long-range to put Leverkusen ahead in the 30th minute, ending the home side's misery after they had wasted a handful of chances. The Germany midfielder beat goalkeeper Laszlo Koteles with a blast from a difficult angle on the right that went inside the far post.

Leverkusen, getting their first win in the Champions League since their last appearance in 2005, had lost three straight matches, including a 3-0 drubbing to Bayern Munich in the Bundesliga on Saturday.

The win lifted Leverkusen off the bottom of the Group E standings to second place with three points behind leaders Chelsea, who drew 1-1 with Valencia on Wednesday.

"It was a very important win for us," said Leverkusen coach Robin Dutt, acknowledging that there was pressure on him and his team after three straight defeats. "It was a great win for us," he told Sky TV.

Leverkusen, last year's runners-up in the Bundesliga but languishing in 11th place in the German league, got off to a sparkling start, putting Koteles under pressure throughout the first half.

However, Germany midfielders Simon Rolfes and Andre Schuerrle both squandered chances in front of the goal in the first 15 minutes.

"We didn't have the finishing we needed," said Dutt. "That obviously has something to do with [lacking] self-confidence. But we played with a lot of determination and I saw we had the right attitude."

Genk's Marvin Ogunjimi nearly equalised two minutes before half-time. The Belgians had several chances in the second half when Leverkusen defenders were caught napping.

"We haven't had a good run at all the last few weeks," said Bender. "So it's only normal that even in a match like this everything didn't go perfectly. We should have had it wrapped up in the first half with the chances we had."