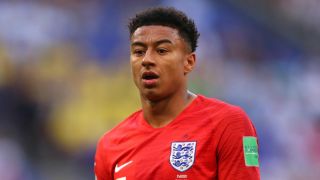 Jesse Lingard and his mum have shared an emotional reunion at the World Cup.

The Manchester United midfielder went viral on social media with a doctored snap after England squeezed past Colombia in the last round.

"No mum, I'm not coming home," Lingard posted on Twitter alongside the image.

And after the Three Lions swept Sweden aside in Samara on Saturday, Lingard was greeted by his mum.

"Because I said to my mum we ain't coming home she came here," Lingard wrote on Instagram, referencing 1996 hit Three Lions.