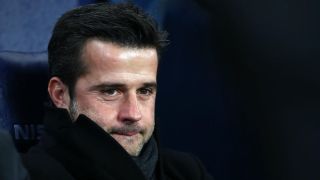 Silva and Watford enjoyed a fine start to the season and were tipped to challenge for a European spot until an awful run saw the high-flying side go over a month without a Premier League win across November and December.

The Hornets have still not rediscovered their best form and their occupancy of 10th place - after a 2-0 defeat at Leicester City - is offering Silva little relief as they are just five points clear of the bottom three.

"We are in a fight since the first game to remain in the Premier League, because it's our goal," the manager said. "I think nothing has changed.

"When everybody talked about our start and the Europa League, I said every time it's not our goal. I knew we were strong in some points but also our weaknesses as a squad. We need to keep going."

5 - Watford have picked up just five points from their last 30 available in the Premier League (W1 D2 L7) – no side has picked up fewer points over their last 10 games in the competition. Slump.January 20, 2018

Silva had been linked with the Everton job earlier in the season, but there is now speculation that Watford could look to replace their manager.

He insists he remains focused on the job at hand at Vicarage Road.

"My position? I don't lose my focus and [I know] what my position is, what the board asked me to do," he added.

Leicester manager Claude Puel felt his side could have enjoyed a more comfortable margin of victory against Watford, but he was just happy to take the three points.

"Of course we could score more goals in the second half, but with just one goal it was not enough because they could score form a long ball or set piece," he said.

"It was important to score a second goal and it came at the end from Riyad [Mahrez]. It was fantastic for everyone."