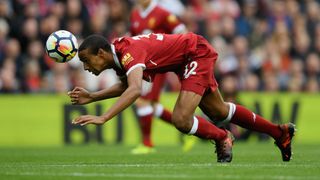 Liverpool defenders Joe Gomez and Joel Matip felt they dominated against Manchester United on Saturday, despite being held to a goalless draw at Anfield.

The home side controlled possession but could not find a way through United, who sat deep and mustered only one shot on target through Romelu Lukaku in the first half.

Although Liverpool were left frustrated, Gomez believes the pattern of play shows that his side have the quality to take on a top team like United.

"It's a bit frustrating for us considering the chances we had in the game," the England Under-21 international told Sky Sports.

"We'll try to take the positives of a clean sheet and a point against such a good team. They had a couple of chances as well, but overall we feel we dominated the game.

"They're a good side with some top class players, but we know we're a good team as well and go into every game believing we can win."

Matip concurred with his team-mate, adding: "I think we dominated. We had most of the possession and had one or two chances. But it's okay, we can live with this."

The former Schalke defender had the biggest chance of the game as David de Gea made a fine close-range stop, but Matip felt he should have scored.

"It was a great save from De Gea, but we had some opportunities," he said. "I have to score and maybe we win this game. His reaction was brilliant.

"We have to move on and take the positive things, like Joe said."