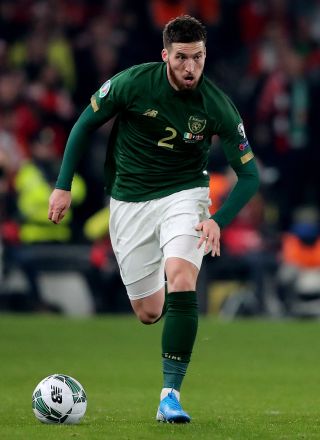 Matt Doherty has issued a ‘don’t panic’ message as the Republic of Ireland prepare to head into Euro 2020 play-off battle with Slovakia.

The 28-year-old Tottenham full-back and his team-mates will run out in Bratislava on Thursday evening knowing only victory will do if they are to book a showdown with either Bosnia and Herzegovina or Northern Ireland for a place at the rescheduled finals.

Ireland have won only one competitive away game – and that against Gibraltar – in three years and, while they are confident they can get a result, Doherty knows there could be twists and turns along the way.

He said: “Worst-case scenario, you go a goal down – it’s not the end of the world. It’s a 90-minute game, which is a long time, so I think there are enough of us in the squad that have enough experience to not panic.

“None of us would panic at club level if we were 1-0 down. All of us would be saying to each other, ‘Let’s stay in the game and see what happens’, so I don’t think anybody would be panicking if that is the case.

“Hopefully it’s not, but if a situation like that does happen, I don’t think there’ll be panic buttons getting pushed around anyway. We know we have the quality and ability to go and create goals.”

New manager Stephen Kenny signalled his intention to play a more expansive brand of football in his first two games last month, and his players have been given licence to express themselves rather than stick to rigid patterns of play.

“We obviously have patterns of play, but if someone wants to do something special and take a few people on and put the ball in the net, you’re obviously not going to say no.”

Doherty got the nod at right-back ahead of skipper Seamus Coleman against Bulgaria and Finland last month and, with the Everton man currently injured, seems likely to retain his place.

He admits helping his country to reach the finals – two of their group games would take place in Dublin – would cap a “magical” few years in his career.

He said: “The last three or four years have gone almost perfectly for me, really. I wouldn’t really change anything, so if this was to happen, it would be pretty special, especially considering the games are in Dublin – and hopefully fans there at that stage as well.

“The atmosphere in the country would be special. It wouldn’t be the same if the Euros were on in Dublin and Ireland weren’t there. It would be pretty magical if that were the case.”