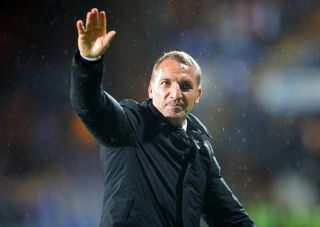 Brendan Rodgers played down suggestions Leicester are on course to gatecrash the Premier League top six after a convincing 5-0 victory over hapless Newcastle on Sunday.

The Foxes collected their fourth win from their last five top-flight fixtures to climb up to third, two points behind Manchester City and seven of leaders Liverpool in the embryonic standings.

While Rodgers reflected with some satisfaction on beating Newcastle – the only side to win at the King Power Stadium under the Northern Irishman’s reign – he was adamant Leicester cannot afford to rest on their laurels.

“It’s still very early, we’re not getting carried away, that’s for sure,” the Leicester manager said. “The top six have been there for a number of years.

“The numbers show that they actually in the last few years have grown away from those teams below.

“For us we’re in a process of getting better and improving and (the win over Newcastle) was a good measure of where we’re at from when we last played them. A few months on, the players have shown really good progress.

“There’s a lot of work to do. It’s a long season, the top two teams are at a really, really high level. Our job is to be as competitive as we can and let’s see where it takes us.”

An acid test of their credentials will come on Saturday when they travel to the north-west to take on European champions Liverpool, who have flown out of the traps this season, winning all seven of their league fixtures.

The game is a significant one for Rodgers as he returns to Anfield for the first time since being sacked by the Reds four years ago.

“I’m really looking forward to it because I haven’t been back since I left,” Rodgers added. “They’re an incredible club. They’ve been amazing in these last couple of years.

“It was great for me in my time there, I learned so much. I’m looking forward to going back, it will be a tough game but we’ll look to embrace that challenge and have a good week’s training leading into it.”

A calamitous defeat in the midlands left Newcastle second bottom in the standings with only one win from their first seven matches.

Newcastle captain Jamaal Lascelles said on NUFC TV: “We’re the ones to blame, it’s our fault that we’ve lost.

“We’ve got to take it on the chin and deal with it. There’s no point in feeling sorry for ourselves now, we had a chance to do something about it and we didn’t. On behalf of the team I do apologise for the result.”

The Magpies have scored only four goals, the joint lowest in the league, while their meek surrender at Leicester highlighted worrying frailties in defence.

“We’ve been in worse positions in the past and we’ve shown character to get ourselves out of it and I have no doubt that we’ll do the same.”