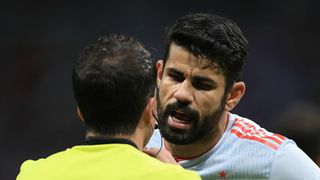 Diego Costa hit back at a journalist who asked why he provoked Iran's players in a Group B World Cup win for Spain.

Costa took his Russia 2018 tally to three goals with the winning strike in a 1-0 victory in Kazan on Wednesday after Ramin Rezaeian's clearance ricocheted in off the striker.

Spain struggled to break down Carlos Queiroz's organised side but moved level with Portugal on four points at the top of Group B.

And after a journalist at the post-match press conference suggested Costa had provoked his opponents, the Atletico Madrid forward responded strongly.

"What game were you watching?" Costa replied. "It was during the first half, they were provoking us.

"It was us on the ground all the time. Watch the game properly, don't just say things because its your national team."

3 - Diego Costa has now scored with all three of his shots on target at World Cup tournaments. Fortunate.June 20, 2018

The winner against Iran means he is one goal behind Portugal star Cristiano Ronaldo in the race for the Golden Boot, but Costa is not focused on individual honours.

"I think the most important thing is to win for the team," Costa said. "I'm happy to score, it's true that it was lucky.

"It was a tough game. He [Ronaldo] is playing very well, I hope he carries on and I do too."