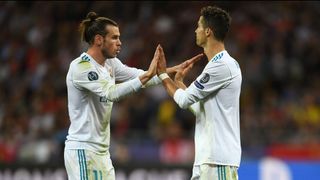 Gareth Bale proved the star turn in Real Madrid's 3-1 Champions League final win over Liverpool as he came off the bench in Kiev to score a remarkable overhead kick and complete a brace late on.

It meant a fifth Champions League winners' medal for an unusually becalmed Cristiano Ronaldo, but the superstar forward managed to grab the attention after full-time by suggesting he may be ready to leave the 13-time kings of Europe.

Bale also expressed more understandable frustrations over being named as a substitute for a big game by Zinedine Zidane once more and indicated he will assess his future with his agent Jonathan Barnett over the coming months.

The prospect of two of Europe's premier attacking talents being on the market this close-season will pique interest from elite clubs but the financial package required to land either Ronaldo or Bale means their options are inevitably limited.

The most obvious fit given PSG's Qatari monetary muscle and Neymar's persistent links to Madrid. Considering the respective stages of their careers, any Neymar-Ronaldo swap would probably look better on PSG's balance sheet and ease lingering Financial Fair Play concerns. The challenge of conquering the Parisian club's final frontier of the Champions League and winning a top-flight title in a third major league could appeal to Ronaldo.

The romantic choice. Ronaldo came of age under Alex Ferguson's guidance at Old Trafford before scaling new heights at Madrid. The 33-year-old has always spoken fondly of his former club and United's huge turnover means they could definitely bankroll a move. However, questions over his relationship with Jose Mourinho following the United boss' tempestuous final days at Madrid remain.

Unquestionably an outsider when set against possible switches to Paris or Manchester, but Juventus are one of Europe's great clubs and in the midst of a dominant era in Italy. Their 2016 swoop for Gonzalo Higuain and murmurs of Paul Pogba returning to Turin show that, while the Old Lady are not counted among the continent's super rich, they are not averse to pursuing a statement signing.

Ronaldo's stunning overhead kick against the Serie A winners in the Champions League this year drew an ovation from Juve fans and this is a player who loves to be loved. "It's something that stays in your heart. I want to thank all the Italians who were here in the stadium and applauded me," he said.

CSL, MLS and beyond

Ronaldo has tailored his game over recent years in accordance with his advancing age, making him a more limited forward but no less effective in terms of goal return. The call of leagues beyond Europe, still often viewed as retirement homes for star names, would feel premature. The Chinese Super League's transfer tax is also an obstacle, while Ronaldo would obliterate the top-earning designated player figure in Major League Soccer – currently the $6.1million Chicago Fire pay Bastian Schweinsteiger annually.

But as Andres Iniesta's surprise move to unheralded J. League side Vissel Kobe showed, if the money can be found and the superstar is interested, there are ways of making these things happen.

Bale's post-match comments in Kiev marked a departure from his usual reluctance to give any public steer on his future plans. However, he seemed intrigued by reports of Bayern's interest in an April interview with Bild. "You can never rule anything out in football," he said, before describing the Bayern link as an "honour". Veteran wingers Franck Ribery and Arjen Robben have signed up for one more season at the Allianz Arena and Bale looks a perfect candidate to pick up the baton, while the Welshman could also be a makeweight in any move to send Robert Lewandowski in the opposite direction. Nevertheless, the Bundesliga giants would probably view the numbers involved as prohibitive.

Old Trafford has been the most frequently touted destination for Bale whenever his stay in Madrid has endured stormy weather. Mourinho was frustrated in his attempts to land Inter winger Ivan Perisic last year. Alexis Sanchez has underwhelmed since arriving from Arsenal and the Portuguese has regularly expressed frustration with other attackers in his squad. If the 28-year-old is on the move, expect United to be part of the conversation.

Links to the other side of Manchester have been nowhere near as prevalent, but Pep Guardiola is widely understood to be in the market for a versatile, pacey attacker who can operate across his front three. Remind you of anyone? Leicester City's Riyad Mahrez is thought to be City's prime target, with Bayer Leverkusen youngster Leon Bailey also in the frame, but Bale's apparent restlessness is unlikely to have gone unnoticed by the Premier League champions.

It is not only Ronaldo who could land a fairytale return. Tottenham making the unlikely move to bring Bale back to London would be an emphatic demonstration of how far they have come since the winger made a world-record switch to Madrid in 2013. Chairman Daniel Levy's stringent wage structure at Spurs would seemingly make this a non-starter, but Mauricio Pochettino emerging from talks with his boss in possession of a new five-year contract suggests the club are ready to make a significant push before their return to White Hart Lane.