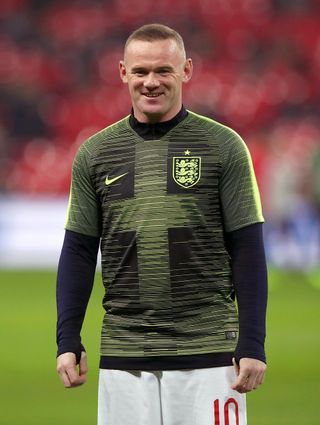 Phillip Cocu was tight-lipped on reports linking Derby with a move for former England captain Wayne Rooney after his side’s 2-1 Sky Bet Championship victory at Huddersfield.

The DC United striker has been linked with a possible player-coach role at Pride Park.

Cocu offered few clues as to whether there was any truth in the rumours following Monday’s win.

Asked whether Rooney would get into his side after they opened their season with a victory, Cocu joked: “Who?

“I’m sorry, I can’t say (anything). There are still three days and the market’s open.

“I’ve said before that we’re not done and we’re working to get the team complete, but I cannot talk about any names at this moment.”

Cocu was probed on how a player of Rooney’s profile might fit into his squad.

Without mentioning Rooney specifically, he added: “It never depends on a player because I like to talk always about my team, not about any player.

“In my opinion the team is always the most important. Never is a player more important than the team. That’s my vision.”

Despite asserting that his coaching team is complete, Cocu replied “I don’t know” when asked if there was room for a player-coach.

Tom Lawrence scored both Derby goals at the John Smith’s Stadium as part of a terrific first-half performance from the Wales international.

His first came after a defensive error from debutant Tommy Elphick, keeping his composure to lift the ball into an empty net, while his second was a well-taken left-footed strike from the edge of the box.

“World-class goals,” Cocu said. “He’s a quality player. He shows his quality on the ball and in combinations, works hard for the team. To start the season with two goals is very impressive.”

Huddersfield boss Jan Siewert was frustrated at his side’s failure to take their chances, with Karlan Grant scoring their only goal from the spot.

“I think we saw two different halves,” he explained. “In the first half we made it too easy for Lawrence to score and they took advantage of our mistakes.

“In the second half, I don’t think they had a shot on target, we had the chances and I think with those big chances we must have scored.

“It’s a game for me where we should have got something out of it.”

Siewert insisted no blame would be placed on Elphick after the error that led to Lawrence’s opener.

“Tommy Elphick is a great lad and a great player first of all,” he added. “For me it’s more important how he reacted in the second half and that everyone backed each other. This is the important thing.

“We didn’t deserve to lose today.”