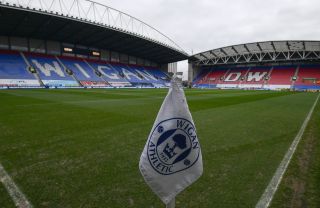 Wigan’s administrators have set a deadline of August 31 for potential buyers  of the club.

Joint administrators Gerald Krasner and Paul Stanley remain in “continuing talks” with “various interested parties” and say they are in discussions with four bidders regarding a sale.

A statement on Wigan’s club website said: “If the contract is not signed by this date, we will have to reconsider the position on the basis that the new season starts a week later.

“The reason for this is that we will be responsible for the team at the start of the season and the fulfilment of the fixtures. Understandably, if no buyer is available, we do not wish to commit to something we cannot see through.

“We are still hopeful that one of the bidders will be in a position to sign the contract as set out.”

Joe Gelhardt and Kieffer Moore were sold to Leeds and Cardiff respectively this week and the administrators confirmed that negotiations remain ongoing for further departures.

“There are further negotiations currently taking place regarding player sales and these will be announced when they are completed,” the statement continued.

Wigan will play in Sky Bet League One next season after failing in their appeal to get a 12-point deduction for going into administration overturned.

The Latics went into administration on July 1 when their new Hong Kong-based owners, the Next Leader Fund, said they could not support the club financially and their relegation from the Championship – due to the points deduction – was confirmed last week.

Wigan finished 13th in the Sky Bet Championship after losing just one of their final 15 games, winning eight. But the decision to dock points saw them finish 23rd and boss Paul Cook quit at the start of the month with the Latics searching for a new manager.