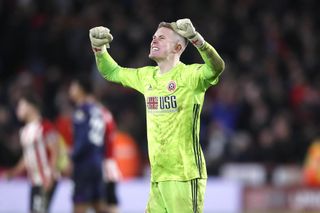 Chris Wilder sees no reason why some of his Sheffield United players should not be on the radar of England manager Gareth Southgate.

The Blades have been the surprise package in the Premier League this season. Many tipped them for an immediate return to the Sky Bet Championship but the club’s first top-flight campaign for 12 years has been a resounding success to date, with the side winning plaudits for their innovative attacking style of football and organised defence.

It has taken Wilder’s team to eighth in the table, just a point behind fifth-placed Manchester United, and behind their success lies a strong core of English players.

“I’ve bumped into Gareth on a couple of occasions when he’s been at a few of our games here, and I’m sure not always to watch opposition players either. I’m sure he wants to keep a close eye on one or two of our boys,” said Blades boss Wilder.

“You never do yourself any harm by playing well and putting in good performances and the boys have done that consistently this season.

“I don’t believe he’s selective to the big clubs either. He’s doing a brilliant job with young players and I believe he’ll pick players who are in form and who will do jobs for him in systems he might want to go with.

“Obviously our system is different to most, or what a majority of England systems have been, but Gareth is such a good manager from a flexibility and tactical point of view and he will cover all bases.

“I’m sure he’ll have looked at a few of our players and think they might be able to do it but they have to be consistent in their performances right the way through.

“There’s a really good group of English players at the moment and a host of talent that will be pushing hard in the remaining games of the season to stake a claim and why shouldn’t some of my players be in the frame?”

Many of Wilder’s English contingent could be involved at The Den on Saturday when the Blades face Millwall in the FA Cup fourth round.

Wilder changed his entire starting line-up against AFC Fylde in the previous round but he insists that will not be the case this time.

“It won’t be 11 changes, maybe two or three,” said Wilder. “I talked about putting out a strong side in the last round but that was dictated by two fixtures against Manchester City and Liverpool.

“I will assess the players this morning and pick a side, but it’s going to be a strong side. We want to go down there and put a performance on and be in the hat for the next round.”