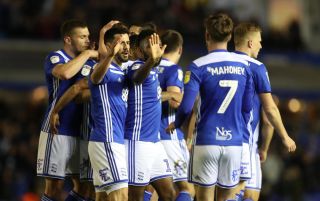 The Blades were forced to settle for a 1-1 draw at St Andrew’s as they missed the chance to climb back into the Sky Bet Championship’s top two.

United are seven points adrift of leaders Norwich, who drew 2-2 with Reading, after another twist in the race for the Premier League.

“We have to keep nice and calm, we have some fabulous games ahead. It’s not want we wanted tonight but the players shouldn’t feel down about it. They went for the win in the second half.

“I don’t know yet (if it was a good point). There was one team who wanted to go and win it and get the three points. It’s a tough place to come, as a team (Leeds) found out on Saturday.”

Stevens netted his first goal of the season when he drilled through Lee Camp’s dive eight minutes before the break.

But four minutes later Morrison stabbed in after Gary Gardner’s header was blocked.

Dean Henderson saved well from Che Adams and Jota but David McGoldrick nearly won it for United only to head over late on.

Birmingham remain 17th, after a nine point deduction for breaching profitability and sustainability rules, but have taken four points from Leeds and Sheffield United in their last two games.

“To take four points was huge in terms of where we need to get to,” said boss Garry Monk with Birmingham six points above the bottom three. “Coming off the back of five losses to take four points is huge for the players.

“It’s probably a fair result but we had the best chances. We showed resilience and character coming off a big performance at the weekend.

“These players don’t deserve to be in the situation they are in but that’s the reality.”