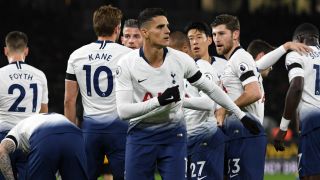 Tottenham survived a second-half Wolves fightback to leapfrog Arsenal into the top four with a hard-earned 3-2 away win on Saturday.

Mauricio Pochettino's men were made to work for three points as Juan Foyth, on his maiden Premier League start, conceded two penalties from which Ruben Neves and Raul Jimenez eroded a three-goal buffer.

But the visitors held on amid a nervy final 10 minutes to condemn the hosts to a third successive defeat.

Erik Lamela and Lucas Moura had earlier struck in three first-half minutes before Harry Kane netted what proved the winner just after the hour with his first goal in four league appearances.

The match started on a sour note for Tottenham with an ankle injury cutting short Mousa Dembele's 250th club appearance.

Son Heung-min was introduced and helped lift the mood, providing the pass from which Lamela punished sleepy marking in the 27th minute.

Kieran Trippier delivered an even better assist less than three minutes later as his curling cross dropped perfectly for Lucas to head Spurs into a two-goal lead.

And everything seemed to be going their way when Jimenez had a goal ruled out for an incorrect offside flag against Matt Doherty.

The tide would have turned after the restart if not for Hugo Lloris, whose trio of fine saves took on extra significance as Kane fired in at the second attempt following Lamela's lead-up work.

A neat finish to give the Wolves fans hopeNovember 3, 2018

What does it mean? Wolves have reason for optimism

Nuno Espirito Santo will rue what was far from a deserved defeat as only a few losses of concentration cost his otherwise impressive and hard-working top 10 contenders.

He was twice beaten from the spot but Lloris deserves no small measure of praise for denying each of Jimenez, Neves and Helder Costa in a crucial period at the start of the second half.

It was a starting league debut to forget for centre-back Foyth as he single-handedly offered Wolves a way back into a match that seemed beyond their reach.

Tottenham host PSV in the Champions League on Tuesday before a weekend visit to Crystal Palace, while Wolves head to London to meet Arsenal a week on Sunday.