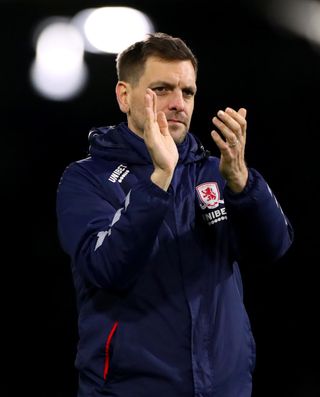 Jonathan Woodgate sought to downplay the touchline fracas that blighted the closing stages of Middlesbrough’s 1-1 draw with Birmingham City.

Coaches and players from both technical areas were involved in a huge flare-up that resulted in Middlesbrough first-team coach Leo Percovich and Birmingham coach Sean Rush both receiving red cards from referee Andy Woolmer.

The brawl was sparked when Woolmer stopped play to allow Marcus Tavernier to receive treatment for what appeared to be a head injury moments before Lukas Jutkiewicz put the ball in the net for what he thought was a winning goal.

Woodgate supported Woolmer’s decision to bring play to a halt, but felt his subsequent reaction to the altercation on the touchline was overblown.

The Middlesbrough head coach said: “The referee has blown it out of proportion. It’s a fracas, it happens. It’s passion from both sides. It got the crowd going.

“Listen, if you see Leo is involved, I’m going to help him. I know Sean. Leo and Sean will meet after this, have a beer and kiss and make up and whatever they do.

“I was charging down the line shouting, ‘Head injury, he’s got to stop the game’. But don’t forget, (Jutkiewicz) was offside when he scored anyway, so it wouldn’t have stood.”

Woodgate preferred to focus on his side’s successful comeback, which maintained an unbeaten home record that stretches back to mid-October.

Woodgate said: “I think if Patrick Roberts stays on the pitch, we win the game, he’s the difference. I thought he was just starting to get a foothold in the game, and I think if he stays fit, we win.

“At times it was tough to get our game going but I thought in pockets we produced at times, sometimes we huffed and puffed and we changed it up and went two up top which got us the goal in the end.

“It was a lot of hard work from the players, it’s been our ninth game in 30 days so it’s been a tough period for us.”

Unsurprisingly, Birmingham boss Pep Clotet saw the closing stages somewhat differently, insisting Woolmer should have allowed play to continue despite Tavernier being prone on the floor inside his own half.

Clotet said: “I think it was a clear goal. The only thing I saw was a goal. That is my opinion, it is a goal, but I have to respect the decision of the referee.

“We will see what is in the (referee’s) report, but I am focused on my job and my job is the daily training and match preparation, and to help and support the players to help my club. Whatever comes from the FA we will have to read it, and I am sure they will look into it.