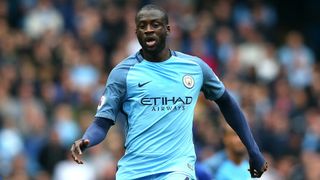 Yaya Toure's camp claim they are yet to hear from Manchester City amid reports the midfielder is set to be offered a new contract.

The 34-year-old had been left out of City's plans and omitted from their Champions League squad after Pep Guardiola's arrival, due to a feud between the manager and Toure's agent Dimitri Seluk.

But Toure, whose deal expires at the end of the season, has impressed since winning his place back last November, making 29 appearances.

Reports over the weekend suggested City are likely to offer Toure a contract extension, but Seluk insists he has not heard from the club for two months.

"We have not heard anything," Seluk said to Sky Sports.

"I read a lot of stories about a new City contract but I know nothing about this. The last time I spoke to anyone at City was in Monaco in March.

"At the moment Yaya is just concentrating on getting City into the Champions League.

"That is his only focus. At the end of his contract, we will look at the offers he has."

Despite his age and the wait for a new contract from City, Toure has received a number of "very interesting" offers, according to Seluk.

"We have many possibilities," he said. "Yaya already has offers from different clubs. They are very interesting offers.

"There are clubs who have already qualified for next season's Champions League but, for Yaya, Manchester City is a very special club.

"He has given his heart to the club and he would find it difficult to leave City.

"He wants to play in the Champions League next season but he would also play for an ambitious club who have big plans - a club who have a project."