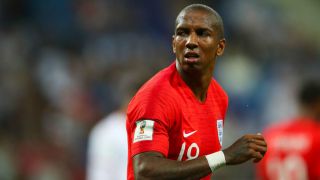 Ashley Young insists there is no point England celebrating setting up a World Cup semi-final against Croatia as they "haven't won anything yet".

Gareth Southgate's side brushed aside Sweden 2-0 on Saturday to set up a first last-four showdown since 1990, when they were dumped out on penalties by West Germany.

Young - who has started four of his country's five games at Russia 2018 - knows the Three Lions have put themselves in an excellent position to win a first World Cup for 52 years, but is refusing to get carried away.

Speaking at a press conference, the Manchester United wing-back said: "We haven't wont anything yet so there's no point celebrating.

"It's nice to get a victory, but celebrations are muted because we've still got big games to come.

"There's a lot to play for and I've said all along the team spirit is fantastic.

Wow Wow Wow . Semi Final , Let me take a minute to let that sink in  . Thank You everyone for your support here in Russia and back home , Unbelievable ! We keep going  July 7, 2018

Croatia booked their spot in the last four the hard way after their last-16 and quarter-final games against Denmark and Russia respectively went to penalties.

Young believes the fact England saw off Sweden inside 90 minutes might be enough to give them the edge in Moscow.

"I think physically it's demanding, to go 120 minutes then have to fly back to the base as well," he added.

"We felt that and they have done it twice, so it could be major advantage, but we know it'll be tough. We need to be mentally prepared to go the distance."