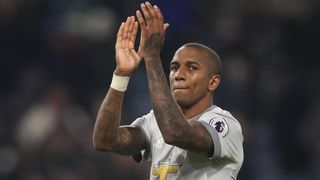 Manchester United star Ashley Young has posted a moving tribute to the victims of the Munich air disaster on the 60th anniversary of the tragedy.

A total of 23 people, including United players, coaching staff and journalists, were killed when the plane carrying them crashed following its third attempt to take off in treacherous conditions at Munich-Riem Airport on February 6, 1958.

Young, who joined from Aston Villa in 2011, says being part of the club has helped him to understand the importance of remembering the tragedy and believes the current team have a "duty" to keep the spirit of Matt Busby's young squad alive.

"The Munich Air Disaster is something I was always aware of growing up but in truth I didn't understand its influence on Man United until I joined the club," he wrote on Twitter.

Keep the red flag flying high and join me, my team-mates, the staff at the club and millions of fans around the world in remembering The Busby Babes. The Flowers of Manchester  February 6, 2018

"The lows of February 1958 that ultimately led to the highs of Wembley 1968 [and victory in the European Cup] are inspiring to every player that has the honour to pull on the United shirt.

"Today we remember and mourn but we must also take inspiration from the response to the tragedy and people like Sir Bobby Charlton. It's a privilege for all of us to still have him around and active at Manchester United.

"You still sing about Sir Matt Busby and about playing football 'the Busby way'. We have a duty to keep that spirit alive and keep making you proud to support this team.

"Keep the red flag flying high and join me, my team-mates, the staff at the club and millions of fans around the world in remembering The Busby Babes. The Flowers of Manchester".

United are hosting a special service at Old Trafford to commemorate the victims, while special banners have been erected outside the stadium and flowers laid in tribute by fans.

And some of the more personal touches. The pink card is dedicated to ‘Duncan, our Dudley lad’February 6, 2018

A minute's silence will be held at 1504GMT, marking the time of the crash, and readings from former manager Alex Ferguson and directors Michael Edelson and Ed Woodward will follow.

Clubs including rivals Manchester City and Liverpool have also tweeted messages of solidarity.

Our thoughts are with all of those affected by the Munich air disaster.60 years ago today, but never forgotten. February 6, 2018