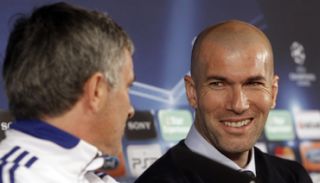 While the 66-year-old construction magnate's current four-year term is up next month, Perez is unlikely to face an election challenge and is looking to the popular former Real and France midfielder to be his new sporting figurehead.

Real and Mourinho agreed to part ways last week after a three-year stint which produced a La Liga title, one King's Cup, but no major silverware this season - considered a poor return for the world's richest club by income.

"We don't know who will be the new coach," Perez told Spanish radio station Cadena Ser on Tuesday when asked about their approach for Paris Saint-Germain's Carlo Ancelotti to replace Mourinho.

"But we want this new sporting project to be lead by Zidane," he added. "I hope one day he will be coach. When we choose the coach, the new person and him will analyse the team so we can take a qualitative step forward."

Zidane played for Real from 2001 until his retirement in 2006 and was World Player of the Year three times.

He has been working as director of football the last two years, though it has been unclear exactly what his responsibilities are. He has also been taking his coaching badge while working with the club's youth academy.

Potential presidential opponents to Perez have a week left to throw their hats into the ring for an election by club members scheduled for June 16, but with no rivals expected, he is set to be returned unopposed.

"If there is no election, we will take charge next Tuesday and then we will start to think about the coach," Perez said.

Under new statutes agreed last year, a challenger has to have been a club member for at least 20 years and personally provide a bank guarantee worth 15 percent of the club's budget - around 75 million euros - rather than relying on a third party.

Perez made a name for himself in his first period as president between 2000-06 when he spent millions of euros on players such as Zidane, Luis Figo and David Beckham - who became known as 'Galacticos'.

He gave little indication on Tuesday who might be Real's next marquee signing.

"We have a magnificent team. All I can say is that we will improve by signing the best," Perez said.

"I have thought about two players and some more from the youth team. We will see what the coach and Zidane say."

Perez made it clear the club wanted their leading player, Cristiano Ronaldo, to stay.

The Portugal forward, the world's most expensive player, has a contract until 2015 but talks to extend his deal have yet to begin while speculation of interest from other clubs gathered pace after his early-season claim that he was 'sad'.

"He told me in the summer he was sad and I told him we would do everything possible for him to be content," Perez said.

"I don't know if he has an offer from PSG. I think Cristiano is the best player in the world. We want to build the Madrid of the future around him and I would like Cristiano to be the best paid player in th