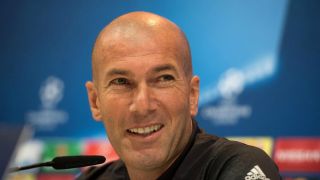 Zinedine Zidane proclaimed he has the Real Madrid 'DNA' and said the club is his life as he prepares Los Blancos for the Champions League final against Juventus.

Madrid are seeking to become the first team to defend the title since the competition was rebranded into the Champions League when they travel to Cardiff for Saturday's showpiece.

Zidane is yet to sign a new contract extension despite leading Madrid to their first league title since the 2011-12 campaign but the Frenchman is relaxed about his future.

"I have one more year on my contract but that doesn't mean anything," Zidane told reporters on Tuesday. "I want to be at this club but it depends on what you do on the field.

"I think the club is happy with what we're doing and I'm only interested in that. The future: Saturday and nothing else.

"I have the Real Madrid DNA, that's for sure. It's my home. Everyone has always been very affectionate towards me and I have always defended the values of this club.

"I've experienced spectacular things with this club as a player, assistant coach and head coach. I'll always be a Real Madrid fan because the club is my life.

"I'm enjoying this moment because I know that one day it will end. I'm on top of my job and we're close to doing something extraordinary, but I'm not thinking about of leaving an important mark in the history of the club. We work hard and that's the spirit of this team."

While Zidane won the Champions League at his first attempt as a coach, during his playing days with Juventus he lost the 1998 final to Real Madrid in Amsterdam and the Frenchman is keen not to repeat that experience.

"When you lose a final it's a horrible feeling but it's part of football," Zidane added. "I accept what football has given me. When I arrived at this club I had to win the Champions League and I got it with this white shirt. After we won the league it was something spectacular. I'm still feeling it and I'm very happy.

"The most important thing is to always give 100 per cent. That's how we have done things during the season, giving everything, with a lot of professionalism and we can be happy for what we have done until now. We have another final and we'll try to do everything we can to win the match."