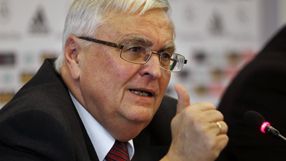 Beckenbauer said earlier this month he wanted to spend more time with his family, paving the way for Zwanziger to seek election as the European football's (UEFA) representative on the FIFA board at the UEFA congress on March 22 in Paris.

The 65-year-old, who took the helm of the DFB in 2004 alongside Gerhard Meyer-Vorfelder before leading it alone since 2006, was re-elected unopposed to the post for another three-year term in October.

"Franz Beckenbauer is a highly regarded representative of German football around the world who did his job in an outstanding manner the past few years," Zwanziger said of the World Cup winning captain and coach.

"It is the aim of the DFB to support our interests in committees of world soccer and that is why I run for this post."

He said he had already informed European football chief Michel Platini and FIFA boss Sepp Blatter of his decision.

"I am happy that he has decided to run for the post despite the difficulties this job brings with it," Beckenbauer said in a statement.

"Theo Zwanziger is the best solution for German soccer."