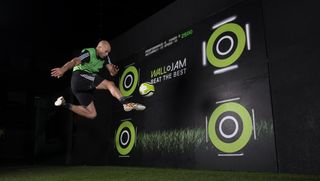 From Glenn Hoddle to Jonjo Shelvey, many a top footballer perfected their technique by kicking a ball against a wall as a child. But as that’s likely to earn you an ASBO nowadays, FFT has found an alternative.

WallJAM is an electronic, interactive wall that enables players to measure the power and accuracy of their passing, shooting or heading via sensor-operated targets that light up when the ball makes contact. The LED display provides players with real-time feedback and results, while using the LED stopwatch also tests your movement and ball control under pressure.

Inspired by surfing trips to south-west France, where “every village has a wall and some kind of game using it”, developer Tim Worboys will begin rolling out WallJAM to leisure centres, schools, small-sided football facilities and, he hopes, professional clubs later on this summer.

All that’s needed is a flat, hard surface, indoors or outdoors, on which to mark out the ‘arena’ and somewhere between £10k and £25k, depending on the model. “It’s not something you would put in your back garden,” Worboys says. But FFT will be happy to take a free sample.

For more football tips see:
Master a deft touch
Take control of the game
Get your game up to speed
Jonjo Shelvey: Improve your first touch
How to keep possession: Perfect your first touch
Master technique: First touch and finishing