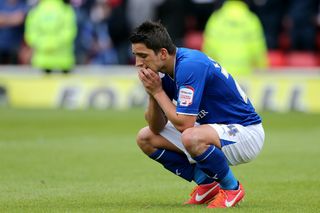 “My team recently missed out on promotion after I missed a penalty. How can I rebuild my confidence and move on next season?”

“I missed a penalty for Leicester against Watford in the 2013 Championship play-offs. They then scored straight from the counter-attack and reached the final at Wembley instead of us.

It was a bad moment for me and my family, but I also felt really bad for the supporters and the club.

It was important to move on quickly. I felt bad on the day and for a few days afterwards, but I could have scored and then we might have ended up losing in the final against Crystal Palace anyway, so that would have been much worse.

A week later, I was thinking about the new season. I don’t live in the past. It’s only football, and you have to put things in perspective. My life could have been a lot worse at that point. Mentally I’m someone who is very strong. You have to move on.

I received some messages from Watford fans that weren’t very nice. The following season we beat them 3-0 and I scored. That was revenge for me. We also got promoted at the end of the season, which was an incredible feeling. You never know what will happen in the future.”

How to respond to a bad result