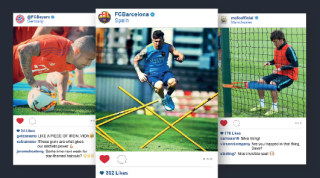 “Lionel Messi is doing hurdles; this is a great way to improve your vertical jump height and your dribbling acceleration,” says Rayan Wilson, senior performance consultant for Back2Action.co.uk. “You can do it with anything at home: just put a dining chair in the garden if you like and jump over the seat. This is taxing on the legs, so just do eight or so reps, performed at your maximum effort.”

“David Silva is doing an assisted squat,” explains Rayan. “It’s a great exercise for knee stability – you can track where they are going, so they won’t cave in. It helps you build up the quads, and will also aid your balance, running, jumping, turning and stability on the ball. You can either buy this equipment, or alternatively do an assisted squat with a TRX cable, which would work just as well.”

“Arturo Vidal is doing a press-up using a ball, which is great for single limb strength,” says Rayan. “If you’re trying to hand off an opponent, you want explosiveness in your pecs and your triceps, and this is a perfect way of achieving it. It is also beneficial in training to get a football in the mix. To build size, try three sets of eight to 12 repetitions. To increase power, attempt two to five repetititons at a higher speed.”

“Stefano Sturaro is using a suspension cable to do a cross between an inverted row and a pull-up,” explains Rayan. “Bring your chest up between the hands, and you’re working the spine and upper back brilliantly. Try eight to 10 reps; three sets; nice controlled movements. It’ll help make you more stable and optimise your twisting and turning on the pitch. Try doing this in between your hurdles.”

“Standing on the bosu ball is a really good exercise that works on your neuromuscular control, balance and concentration,” says Rayan. “It’s all about stability of the ankle, hip and knee. You can either do it in pairs and vary it – throw a ball to each other to try to unbalance the other guy – or you can do single leg kick-ups to work on skill. Do from 15 seconds to a minute.”

This workout was designed by Rayan Wilson, director of Back2Action. Follow @Back_2_Action