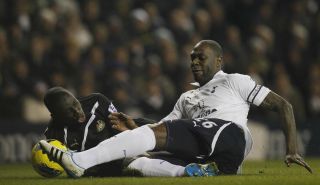 First up who are the best strikers you’ve played against?

I was fortunate to play against many great strikers, but for me Thierry Henry was always the stand out player. He had a mix of everything that made him a top class player.

Did you ever play against strikers who tried to intimidate you?

Absolutely. You get so many different types of players, some that are very physical, others that have got a lot to say and you have to get used to playing against different types of opposition. But the main thing is to keep your calm and composure, I was someone who never got sent off and only picked up a few yellow cards. That was part of my make up and who I was as a player, and regardless of who I was playing against, I tried to keep the same temperament and the same balance.

Did you relish a mental battle?

Yeah, I used to love being in the tunnel and looking at the players I was going to come up against. The trouble with being a defender is you can have a great game and mess up in the 90th minute, but a striker can have a terrible game and score the winner in the 90th minute. For that reason I think defensively you have to really concentrate throughout the 90 minutes. It’s best not to say too much until the game’s finished because you can always get caught out or slip up.

Who were the best strikers you played with?

I’ve played with so many great strikers; it’s so difficult to pick one! Players like Teddy Sheringham and Les Ferdinand had great experience when I was a young player coming through. People like Robbie Keane, Jermain Defoe and Dimitar Berbatov were and still are top class players. It would be difficult to pick out one… they’re all the top players I played enjoyed playing with and they would have been great for any Tottenham team in any era I believe.

What qualities do top strikers have that set them apart?

You get certain players that can score goals from anything and make goals from anything, they’re just natural goalscorers. That's the class I’d put someone like Jermain in. Then there’s players like Teddy, Robbie Keane and Berbatov who were all rounders and obviously quality, who could score any type of goal. They all had incredible finishing ability.

Did you play alongside any strikers who were completely obsessed with scoring goals?

Yeah, I’d say Jermain was the most obsessed, and that’s the reason why he’s 34 and still scoring goals now, because he loved scoring goals more than any player I played with. You’d be walking past him in the gym and he’d try and slot one past you - he’d make a goal out of anything! You didn’t even know you were in goal but he’d put it past you for some reason! That was Jermain and that’s why he’s still able to do it now at this level.

Premier League Kicks is celebrating its 10 year anniversary, what’s your role and what’s the benefit of the scheme?

I was here 10 years ago and it’s gone so fast. It was great when it launched, but it’s great to be in the position 10 years down the line knowing that it’s been such a success and helped to change many people's lives. It’s important because I was a young kid growing up and without football I’m not sure what else I would have been doing. To create an opportunity where people can come into a safe environment and play with other young people is very rewarding.

For Premier League players like Wilfried Zaha and Marcus Rashford, Kicks was a big part of their journey to the Premier League, do you think street football is important for a player's development?

Yeah for sure, I think it’s something that will never leave the game. Players like Brazilians and South Americans have always been known for skills and flair and I think being able to play in circumstances with many bodies around in caged environments and being able to really work on your footwork is something that will always be part of football even now. Even players like Wayne Rooney, someone who’s mentioned as a street footballer… that’s what enabled him to be a footballer at such a young age, because he had all the technical make-up regardless of his age to be able to perform at a high level. I had a cage outside my house where I grew up and that was something that saved me. I could go where my mum could see me play and I was able to really practise the skills that helped me to become a footballer.

Of course, you’re now a comic book star, how did that come about and how did you get involved?

I originally got involved through the club when I was still playing and we’ve always been engaged within the community. This is something I did 10 years ago when I came down and we launched Kicks. Obviously I’m now retired and still involved in the club so I’m still able to be a part of it.

Recommended for you:
Ryan Bertrand: Be ready for any challenge

Chris Smalling: How to be the complete defender

Rio Ferdinand's Ultimate Defender
Franco Baresi: How to defend like a master
Nemanja Vidic: Tackle any threat
Ashley Cole: How to handle every opponent